Enjoy the simpler things in Minecraft life with a new mod called BLOOM that lets you become a groundskeeper. That’s right, now players will be tasked with growing and restoring a beautiful garden in Minecraft similar to Animal Crossing, Harvest Moon, and, of course, Stardew Valley. This mod is all those slow-paced gaming vibes wrapped up into one nice package. It’s free to download now in the marketplace.

Plant mod that plans to add more flora to the overworld to make it feel lush. Presently, it adds rafflesias and kabloom bushes.

Rafflesias generate naturally in jungle biomes on grass blocks. They are also sold by Wandering Traders. They also repel most passive and “intelligent” mobs such as Villagers, Illagers and Piglins. 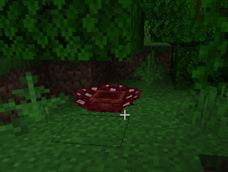 They drop seeds and when planted they have three growth stages.

When stepped on or hit by a projectile, they make poison clouds and go into a cooldown state. They revert back after a short period of time or after using bone meal.

Suspicious stews can be fed to them to change the cloud’s effects to that of the suspicious stews’ effects which lasts for one cloud. Only one stew can be held at a time. This is detected by comparators and can also be done by dispensers. Doing this gives you the Suspicious… advancement.

Rafflesia can be pollinated at a 10% chance by setting off adjacent rafflesias’ poison clouds. This does not work when either of them hold suspicious stews. After a short of period of time, the pollinated rafflesia will revert and drop a rafflesia seed. This can be sped up using bone meal. 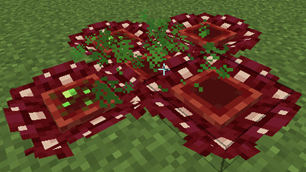 Kabloom Bushes generate in patches in plains with a 1 in 500 chance to generate in a chunk, so there will probably be one per plains biome if not more. The fruits can be sold by Wandering Traders.

The bush has a total of 8 growth stages, with bonemeal advancing one stage at a time.

Once it’s fully grown, it has a low chance to explode on its own. It also explodes when an entity bumps into it when it is fully grown or it is right clicked without shears. Right-clicking with shears will drop the fruit and grant the advancement The Bloom Has Been Defused. Dispensers with shears can automate this. Breaking it without shears or a silk touch tool also causes it to explode. 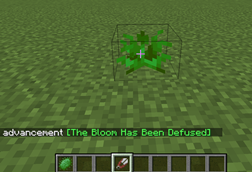 The obtained kabloom fruits can be crafted into kabloom seeds or be thrown to make a small explosion and can be used as a weapon. They can do enough damage to instantly kill a cow if aimed correctly. The fruits have a cooldown like ender pearls and chorus fruit. They can also be thrown by dispensers. 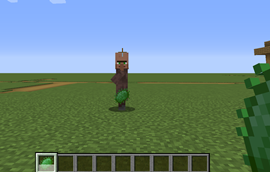 On impact, the fruit explodes and launches kabloom seeds into the air which will land nearby. Kabloom seeds cannot be destroyed by kabloom explosions. The fruit can also be directly crafted into seeds. Seeds can be planted directly like sweet berries to grow kabloom bushes. 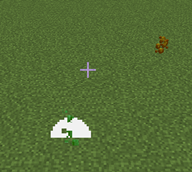 Those who truly enjoy customization will get that chance to not only repair the dilapidated and forgotten garden but can add their own unique touches. There are 30 unique plants to grow, foraging, fishing, and even good old-fashioned mystery solving. Also important to note, no monsters. You really have nothing to worry about in BLOOM besides deciding which flowers to plant, and how to lay things out. It’s quite a change from fighting off monsters in regular Minecraft gameplay.

You are free to use this in any modpacks with credit. This mod does not change anything that might cause compatibility issues.

MineCon Life, now called Minecraft Live, has left us a huge amount of news and news related to the universe around Minecraft. One of the most exciting innovations has undoubtedly...

Find Heroes Legacy Codes Roblox,Latest and updated List 2020, Here you will find an updated list with all the valid and active codes in the game, just copy & paste...

Shinobi Life 2 Codes | Latest and updated List 2020 Were you looking for some codes to redeem? You are in the right place at RBLX Codes, hope you enjoy them!...

Surprisingly, the first preview version of Optifine for Nether Update quickly appeared. Currently, the mod is 40% ready, but the most impatient players can download a pre-release with a limited...

Recent Mods
Popular
Fanpage
Leave comment
x
About - Privacy - Terms of Service
All files from dlminecraft.com can be downloaded for free. DLMinecraft.com is not affiliated with Minecraft or Mojang in any way
2018-2020 © dlminecraft.com - All rights reserved.
We use cookies on our website to give you the most relevant experience by remembering your preferences and repeat visits. By clicking “Accept”, you consent to the use of ALL the cookies.
Cookie settingsACCEPT
Manage consent